Elizabeth M. Herrera has written a masterpiece that reflects the state the world is currently in. We might not have been struck down by a deadly virus yet, but we most certainly are destroying ourselves and failing to listen to those trying to warn us.

The character development was brilliant and I love how diverse people from different parts of the world, who all know one another, are able to combine as a solid team. The storyline was insanely addictive to read. I had an idea of what was going on in the back of my head, but there were so many parts that both shocked me yet made perfect sense. It really makes you think and I adore a novel that does that. I think Of Stars and Clay is a book that will open the eyes of those who read it and hopefully take a bit of insight from it when looking at the reality we are currently facing.

“OF STARS AND CLAY” IS THE SECOND BOOK IN THE EARTH SENTINELS SERIES. EACH NOVEL STANDS ON ITS OWN. 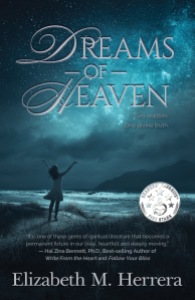 Dreams of Heaven by Elizabeth M. Herrera is an inspirational book that tells a brilliant and heartwarming story, while reflecting on the mysteries of life, love, faith, death, and eternity. Meet Savannah Watkins, a woman just like any other, except that she has very unusual dreams. The recurrent dreams are about the loss of her family in a car accident, so she is caught between the reality of her waking and the trauma of her sleep. As she struggles for answers, Jesus appears and offers to guide her, spending long moments with her along the beach and at the grocer’s. In this sudden yet enlivening contact with the Divine, Watkins discovers the depths of Jesus’ teachings and the answers to the pain of loss that most of us experience at some time in our life.

This is an exciting book, filled with wisdom and insight, a story that is both entertaining and inspiring. It starts in the middle of action and the pace picks up from there. It is fast and gripping and I enjoyed how the author managed to keep readers’ curiosity awake and strong through each page of the narrative. Readers will identify with Watkins, a character who is symbolic in that she represents the fears and uncertainties of most readers, living through the desert of faith until the encounter with Jesus. Elizabeth Herrera is a good writer and she has the gift of getting her message across through her storytelling craft. Dreams of Heaven will awaken a new sense of reality in the hearts of readers and the dream of what makes life worth living.

Purchase Dreams of Heaven at: 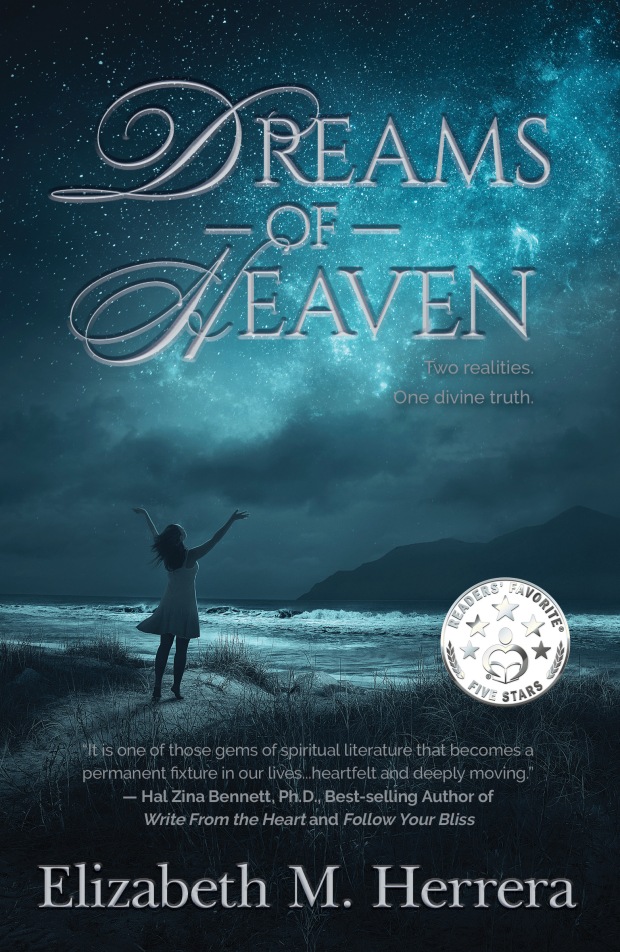 The inspiration for Dreams of Heaven came to me in a vivid dream. As a healer, I’ve learned to pay attention to vivid dreams, which are a rare occurrence, but always offer profound answers and insights. In this particular dream, Jesus Christ appeared and showed me four scenes. I knew when I awoke that I would write Dreams of Heaven. But why feature Jesus Christ? I’m not Christian. Although I do confess that Jesus is always a part of my shamanic healings (shamanism is a Native American practice) where he appears as a spirit guide. I suppose a Christian would say that Jesus comes to me in a focused prayer, but alas, enough with the labels.

So, one month after the dream and during a winter holiday break, I began to write. But how do you write a story that is not your own? I had no idea how the dream’s scenes would come together or how the story would end. In fact, I couldn’t even conceive of a good ending.

During the writing process, I sat quietly before each session and prayed for inspiration, then typed whatever came to me. (It soon became obvious that it was also a lesson in learning to listen to the Divine Voice, and releasing the fears that prevented me from publically stating unorthodox teachings.)  The story began to weave itself between two realities. In one, a dream of a car accident haunts the main character, Savannah Watson. In the other, she deals with the tragic aftermath. As Savannah struggles with the prophetic dream, Jesus appears and speaks to her. He goes grocery shopping with her, and for walks on the beach, answering her questions (even if she doesn’t always think so).

Unlike many novels and movies that offer generic and vague answers, in Dreams of Heaven, Jesus offers specific messages — but they are given through the interpretation of love, leaving fear and judgement at the door. Messages that many Christians would say dispute the Bible’s teachings, but do they?

The church has offered an interpretation for millenniums, but interpretations can vary. Who is right? I’m not sure it matters. We all have a path to follow, and we choose the one that is right for us. At one time, Christianity was right for me. However, in my early 20s, I lost my faith for a decade before my belief in God and Jesus returned, but without the religious connotations. God without religion? What a novel idea (no pun intended). Which means, this book’s message isn’t right for everyone. But for those looking for answers about redemption without judgement or condemnation, this book is just right.

Purchase Dreams of Heaven at:

“Dreams of Heaven compels you to examine your beliefs about life and death. You will be drawn to read every page.” —Reverend Emile Gauvreau, Center for Spiritual Living Cape Coral

“Dreams of Heaven is a beautifully crafted story that centers on the dream/reality of a terrible family tragedy and the main character’s sudden ability to see and converse with Jesus Christ. Heartfelt and deeply moving, the book is like an epiphanous dream probing the mysteries of birth, life, and death. It is one of those gems of spiritual literature that becomes a permanent fixture in our lives, always remembered as a gift for that special friend with whom we wish to share our most deeply felt beliefs.” — Hal Zina Bennett, Ph.D., Best-selling Author of Write From the Heart and Follow Your Bliss

Earth Sentinels definitely stands out for the plot. The plot is fantastic and the way it has been treated makes for an interesting read. What I like about the treatment is the fact that the author has chopped the story into small blocks, so you are not caught up in too many intricacies and webs of the plot. You are able to move into the story gradually and fully involved, which I thought was a really clever narration. Had it not been for this level of narration, the reader would have gotten lost because there are so many characters and individual stories. It would have been difficult to catch up with each character.

The story moves at a great speed and the language is beautiful as well. While the first half introduces the entire characters, the second half is where the actual story comes into full bloom and does so pretty interestingly. In spite of telling a complex story, involving a lot of characters, I felt the author eased the readers into the plot very delicately and kept it intriguing.

I still don’t know how to describe the book. In spite of being filled with fantasy elements and mystical worlds, it is very much real and intertwined with the modern world. A great thought process is definitely visible in the story.

The book for one has a pretty unique and interesting storyline with a good technique in narration. It does not burden you with the plot and details. In fact, the author has made it quite an easy read with an intelligent treatment in my opinion. The book definitely makes for an interesting read.

To read more book reviews by Merril Anil, visit her blog at merrilanil.wordpress.com.